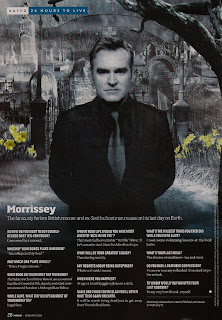 And that's why he must stand outside the cemetery gates -- forlorn, yet content. The Canadian Maxim magazine has a one-page interview with Morrissey in its February issue. Apparently the premise of the Q and A is a 'Last 24 hours on earth' kind of thing and the interviewee is to reflect (succinctly, of course) on his life, his possible afterlife and how he might spend his last living breaths. Some pretty good questions, and the wit of Morrissey shines through in most of his responses. Here it is, so you don't have to spend any money on a copy of Maxim magazine. [thanks to MorrisseySolo/MusicSlut]


HOW DO YOU WANT TO GO? DOUBLE DECKER BUS? 10 TON TRUCK?
Concussed by a coconut.

WHICH OF YOUR SONGS PLAYS IN HEAVEN?
“Satan Rejected My Soul”

AND WHICH ONE PLAYS IN HELL?
“I Have Forgiven Jesus”

WHAT BOOK DO YOU REGRET NOT FINISHING?
The Toilets Are Closed In Your Honour, an account of the life of Cressida Dick, deputy assistant commissioner of London’s Metropolitan Police.

WHILE ALIVE, WHAT DID YOU SPEND MOST OF YOUR MONEY ON?
Legal fees.

WHO IN YOUR LIFE WOULD YOU MOST LIKED TO “KICK IN THE EYE”?
That meat-fed horror Jamie “Orrible” Oliver. If he’s a master chef, then I’m Miss Brazil 1970.

WHAT WILL BE YOUR GREATEST LEGACY?
Thundering suavity.

ANY REGRETS ABOUT BEING OUTSPOKEN?
Whatever I said, I meant.

WHEN WERE YOU HAPPIEST?
At age 12 I could juggle a plate on a stick.

NAME 1 THING YOU’RE GLAD YOU’LL NEVER HAVE TO DO AGAIN.
It will be worth being dead just to get away from Victoria Beckham.

WHAT’S THE WILDEST THING YOU EVER DID WHILE YOU WERE ALIVE?
I took some swimming lessons at the local baths.

WHAT’S YOUR LAST MEAL?
The disease of smallness - tea and toast.

DO YOU HAVE A DEATHBED CONFESSION?
I’ve never seen myself naked. It seemed impolite to look.

TO WHOM WOULD YOU WHISPER YOUR LAST GOODBYE?
To my very best friend… myself.
Posted by james at 2:29 PM