My favorite part of my interview with Alberto Zoppe -- done about six years ago by phone, with me in Chicago and he in Arkansas -- was when he recalled sleeping in his family's circus trailer, which was pulled by horses, on Italy's unpaved roads, at night when he was a child. “Sometimes it was raining,” he said, and the sound of the rain, along with the sound of the steel wheels on the unpaved country roads, “made such a nice sound, and I slept so well. That was so beautiful.”
Here's the rest of my chat with him, along with some recollections by his son and his wife.
*****

By the mid-1940s, the Circo Fratelli Zoppe had reached a pretty serious level of renown throughout Europe. Orson Welles witnessed firsthand Alberto’s riding act, and afterward told Alberto about a circus movie the director Cecil B. DeMille was working on, called “The Greatest Show on Earth.” He asked Alberto to come to the U.S. with his horse act, and become a part of this movie. Alberto, declined Welles’s offer, since, with family circuses in post-war Europe suffering from a lack of animals, his circus needed his act, as well as his guidance, to survive.

Welles was undeterred, and enlisted the help of John Ringling North, who, at the time, was owner of the Ringling Brothers, Barnum & Bailey Circus, to convince Alberto to come to the U.S. Welles brought North to Italy to see Zoppe, and beginning in 1947, North regularly pitched the idea of leaving Italy for the U.S. to Alberto. Zoppe would be part of DeMille’s film, as well as a featured performer in the Ringling Brothers circus.

“We were at the airport, and John Ringling North said, ‘you can’t wait another year. I talked to Cecil B. DeMille and he wants you for the movie. You have to go now.’”

His work on “The Greatest Show on Earth” led to decades’ worth of film and television work for Alberto Zoppe. Other movies that he either appeared in, worked as a consultant on, or trained actors to ride horses in, include; “Thoroughly Modern Millie” (which Sandra and Alberto’s sister Ruggera were also in), “The Great Barnum,” “Trapeze,” and “Toby Tyler.”

Posted by james at 3:37 PM No comments: Links to this post 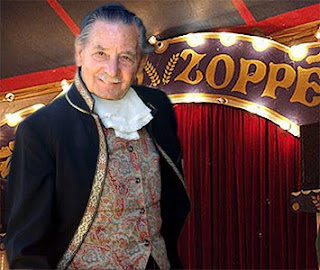 This is out of order as far as the piece I wrote on the Zoppes, but I only today, while browsing obituaries, saw that Alberto Zoppe died last March. More people should know about him -- his was an incredible story. I regret I haven't been able to tell his story to a large audience, but maybe it'll get passed on now, via this blog and those who read it.
*****

Alberto Zoppe didn’t want to come to the U.S.

Alberto Zoppe is the fourth generation of the Zoppe circus family. Alberto now lives in Arkansas, which serves as a sort of base for the current Zoppe Family Circus, their trucks and equipment and horses being kept there when the circus isn’t on the road. He was born in 1922 in the Veneto region of Italy, but he says that he was part of the circus before he was born.