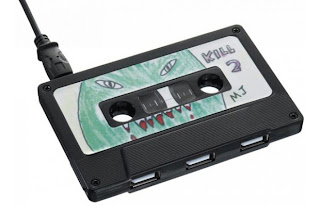 Since my next computer may may a few USB powered devices attached to it at any one time, I will need a new USB hub, a place where these devices can all connect, because such a device would be able to handle more devices than the computer, which may only have two or at most three, plug-ins, would have.
And I have found just the USB hub I want. The Marc Jacobs-designed USB hub, which looks a lot like a cassette tape -- and not only does it hold a handful of USB devices to connect to your computer, it even measures to the same dimensions as a tape! How cool is that?
I do not, however, long for a MacBook that resembles a TRS-80 laptop.
Posted by james at 6:26 AM No comments: Links to this post

It's time to look back over the past year, its resolutions and reflect, then look ahead and envision what I hope or intend to accomplish within this coming year. Not merely because this is the turn of the year, but also because it's just a good time to do such a thing.

My three areas to reflect and resolve are personal, professional and academic. I am addressing the professional today, because it is the easiest to do right now.

At the start of the last year, I resolved, as I often do, to get work in at least one place I had not previously written for. Meeting this happened pretty quickly, as I wrote a piece for the Chicago Sun-Times food section on the NHL wines and had a great time doing it, too. (One of the panelists I got to sit in for the wine tasting was then Cook County Commissioner Mike Quigley, now a U.S. Congressman.) In the wake of that, I was offered the opportunity to become a part of the new Sun--Times' food blog, "Digging In." (I came up with the name -- that's something I do, I've come up with names for things since my college paper's sports column, events I've done, etc. It's an odd talent.) Even though I do not get paid (or get expenses reimbursed) for this work, I think it is a great opportunity to practice and hone my writing and I still harbor some hope that it can become a platform to other work, such as food writing, or appearing on TV or radio to discuss the food blog.

Toward the end of the year I took some uncharacteristic initiative in both responding to the paper's op/ed editor's call for end of the year guest columns and also by contacting a features editor about writing about a new bar started by Dave and Kristine, of "Planet Earth" new wave nights fame and whom I got to work with at the Holiday Club for a couple years.

Remarkably, my idea for a column was not rejected and after a minor bit of tweaking, it appeared, along with my photo, in the Sunday paper (!!!) the Sunday after Christmas. This thrilled me greatly. Additionally, a features editor OK'd my bar idea and I am currently (oh cripe, it's due tomorrow!) a short piece for the paper on that.

So, as far as that goes, I'm pretty content with these minor accomplishments. But therein lie my resolutions for the coming year -- I intend to build on these little achievements and want to do at least a couple more columns for the editorial page of the paper. I also want to do more features pieces. If the opportunity comes along to write in any other medium, I will take it. (Hell, I have to take five unpaid furlough days this year, in addition to a 5% pay cut, so I'd better take more work!)

My full-time job is still working as a crime/death/murder and mayhem reporter for the Sun-Times Media Wire. In February I will mark four years at this job. Notice I didn't say I will be celebrating it. I am thrilled that after enduring a year or so of not knowing if the following month would be last employed there, it now seems as though the company I work for is not going under anytime soon. But I think I have outgrown the position of wire service reporter. There is no room above that position in the group to move to, so I will continue to do the best I can do there, but all the time be on the lookout for whatever opportunities arise in the newsroom, or elsewhere. As far as a resolution for my full-time work, I'd like my current full-time position to be not my principal source of income by the end of 2011.

I seem to have lost my primary freelance job, as a writer/columnist for the Chicago-based Italian American monthly newspaper Fra Noi. To be honest, the work I'd done the past few years there, following the anti-defamation beat, got to be tedious, especially when I'd have to report on some folks getting angry about comments they construed as anti-Italian by some regional radio talk show host I'd never heard of. And I am so glad I got out of that gig -- mutually agreed upon by myself and the editor -- before this whole "Jersey Shore" thing got going. Oy. But I also lost a great deal of work for that paper doing celebrity profiles, since they now have at least one person who has the time and resources to track down and personally interview celebs, something I could do less frequently as my full-time job took demands on me time and energy-wise. I'm disappointed that I can't do anything remotely political or left-leaning for the paper because it might offend some old biddy who pays $14 a year for a subscription, but I still hope I can do a story at least once every couple/few months, because I like the people there and I like the direction they are trying to take (smaller format that is more newsstand friendly, getting rid of 'news' about social clubs and ladies' auxiliaries, etc.) to up the circulation.

So that's my 2009-2010 professional reflection/resolution. I've moved up a step or a step and a half on the ladder, gotten a splinter or two along the way, taken a hit in terms of pay, but like the song says, "I'm still here," and I believe I can keep moving up and moving on, and I ain't but hardly just begun.
Posted by james at 3:59 PM No comments: Links to this post 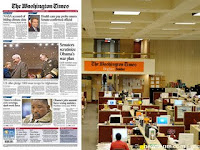 I normally ache just a little bit every time I hear of another newspaper -- be it in Detroit, Denver, Seattle, etc. -- that is closing shop or cutting back its frequency or going to an all-Internet publication, but when I heard the latest case of what appeared to be more bad news for the industry, I shed not one tear -- in fact, I would not mind being around for its demise.

The paper here is the Washington Times, a relatively young publication, owned and operated by the Rev. Sun Young Moon and his Moonie church and a Right Wing, anti-Democratic publication, a la Fox News.

The paper last week published its last Sunday edition and since it has no Saturday edition, it will only be a five-day-a-week paper now.

The Washington Times also announced that it has ended a Web project called, "TheConservatives.com," which, according to the WaTimes, "was intended to provide a platform to allow allow "the Joe the Plumbers of the world to speak up to major thinkers, like Newt Gingrich..." (In case anyone doubted that the paper was run by Right Wing reactionaries.)

The paper is also completely cutting its sports department.

I realize that not everyone, and probably not many, of its staffers adhered to its crazy political agenda, and its never good to see professionals, especially in my profession, lose their jobs, but this particular employer is evil, and the world would be better off without it.
Posted by james at 6:58 AM No comments: Links to this post