but it's better than nothing, I suppose. And it's better than any plan the Republicants have come up with. A chart on just what sort of effect that the Health Care Reform will have on the nation.
Posted by james at 2:15 AM No comments: Links to this post

By Alcazar. Nice rousing anthem if you can stand Euro-pop-disco-y stuff. And the video is certain to make the bigots cringe.

Posted by james at 11:56 AM No comments: Links to this post 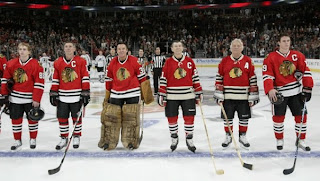 in my fantasy hockey league.

Ah, it's been a tough road these past 11 weeks, especially given that in my six team league (hey, this is the lower 48, so its obviously tough to get more than this many people to take part in such a league), i have suspicions that one guy, the league's 'commissioner,' may own more than one, and possibly as many as three of the teams, but after playing just above .500 a few weeks then pummeling two weaker teams the past couple weeks, my team, "Cold Steel" (yeah, named after a Tricky song), is atop the others, with a winning percentage of .597.

It's not nearly as satisfying as having a winning team in fantasy baseball, where you have 8 or 10 or 12 teams and guys who really want to win, but it's fun to play around with in winter and helps deepens my appreciation of the game of hockey, which I love as much as baseball, as well.
Posted by james at 11:00 AM No comments: Links to this post

As a reporter, there's nothing I hate more than people, especially those who are paid to talk to the media, who say "no comment." I believe in the exchange of information and ideas and that's how the truth is revealed, since so often people want it covered up.

But one area where I think the less said, the better, is the 'comments' section of news articles online. Generally those who comment on news are uninformed, unintelligent, tactless, vulgar and save for when they are working with others to hijack the comments section or promote a particular political point of view, contribute absolutely nothing to the discussion. There are times, though they are extremely few and far between, when someone commenting on a story will offer information valuable to the reporter or law enforcement, but for the most part the comments are useless and obviously are being done while someone is paying the commenter to do work that has nothing to do with the matter they are commenting on.

The latest story that got me annoyed once again about comments and commenters was the feel good story about a young man who won the city of Chicago's annual vehicle sticker art contest. A dozen or so high school students had their designs selected as finalists, and residents could go online to vote for the design they liked best. The story in the Chicago Sun-Times featured a picture of the high school student, smiling, with a poster-sized reproduction of his winning entry. It was an innovative design that featured a portrait of Daniel Burnham and a background of some of the famous urban architect's designs -- altogether a pretty handsome work of art, one which I don't mind at all displaying on the windshield of my car for 12 months.

But not everyone feels that way, at least among those who commented on the winning entry and the young artist, on the Sun-Times' Web site. Some decried the use of a photo-portrait of Burnham in the design, others didn't like that the young man apparently didn't draw it freehand, doing it by computer instead. Others dissed the selection process, saying it was like "American Idol," and that the kid who goes to the biggest school or who has the most friends, is the one who won, and that artistic talent had nothing to do with it. Some others took the opportunity to say that the voting system was rigged so that a certain school or a certain demographic group would win, and of course there were those who took the comment box as their opportunity to let the world know how much they hate Mayor Daley.

But all I could think about was the smiling young man in the Sun-Times photo, and his parents, brothers and sisters, grandparents, even, and how proud they must have been of him and his achievement. Until they dared read the comments posted by the mouth-breathing know-nothings. I truly hope the idiots' comments didn't ruin an otherwise great day for this young man and his family. And I hope that those who saw a comment box as an invitation to crap on this piece of good news coming from the inner city of Chicago aren't always like this, but if they are, that young man, and all of us who cheer good news like his, will realize that at his age he has contributed more than all these commenters combined.

With Liberty and Justice for Some...

"We had 300 people there, 150 of whom we allowed to testify. We'd still be debating it today, right now, but when I knew the bill had the votes, I pulled the trigger. Yes, I am opposed to the bill at this point in time, but their (Garden State Equality) advocacy has come a long way, and I am quite certain some time in the near future, I believe the tide has turned a little bit, and they will win with their issue. I am still opposed personally because of my religious beliefs as a Roman Catholic, and as senator of the 36th District, which is mostly made up of Irish and Italian Catholics, and Orthodox Jews,"
-- State Sen. Paul Sarlo (D-Wood-Ridge) of New Jersey, passed a marriage equality bill out of committee on Thursday.

Sen. Sarlo, it's nice that you are thinking of the beliefs of your constituents, but you were elected as a representative to a democratic government institution, not as pope, nor as bishop or rabbi. Besides, don't assume that just because a constituent is Irish or Italian and Catholic, that they oppose equal rights. It's a simplistic argument and maybe just a little bit insulting to those populations. God Bless.
Posted by james at 7:41 PM No comments: Links to this post 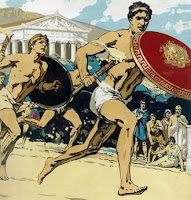 Throughout the city of Chicago's recent bid to land the 2016 Olympic games, I was pretty ambivalent about it. Some people were absolutely dead-set against it, others brought out the pom poms and were all for it, including Mayor Daley and anyone who did not want to incur his wrath. That was probably a big mistake of his since the opposition to the Olympics in Chicago was as much anti-Daley as it was anti amateur sports festival.

People were upset, and rightly so, about the lack of transparency of the process, about the fee hikes and what they took as the selling of the city (e.g.., the parking meter deal) of Daley to put forth a competitive Olympics bid. People also worried, again, rightly so, about the corruption that just seems to be inherent in this city and how it would manifest itself when it came to hosting the games, building the needed venues, etc. There would likely have been cost overruns, money exchanging hands under the table, deals that would make Salt Lake City look like, well, some sort of holy city, and then there'd be the hassles that regular city residents who wouldn't care either way about the Olympics would have to deal with -- buses and trains that would be even more crowded than normal, migrane-inducing traffic messes, construction projects throughout the metropolitan area, police possibly taken out of the neighborhoods to work at the Olympic sites, etc. And these are all very valid concerns.

Additionally, there are problems in Chicago that need to be fixed instead of throwing an Olympics. Kids and addults aren't safe on the streets or in the schools, the infrastructure is falling apart, the transit system is hobbling along, the schools aren't that great, we're short of a fulll police department by a couple thousand cops, and still, in spite of all that, the mayor and those who worked to bring the Olympics to Chicago deserve a round of applause, if not for the work they did then for at least some of their motives.

This is quite an accomplishment by Daley, to elicit sympathy for him, since he can be altrenately petulant and a bully, especially when he gets all red-faced and shouts at critics or anyone who dares question what he's doing. He loves to try to embarass or scapegoat the media, a favorite whipping dog of his, merely for sking basic questions. But he was right when he asked critics of the plan to get the Olympics, how else they'd make infrastructure improvements, how they get millions and millions of federal dollars, how they'd get tourists to the city from around the globe in the nidst of the worst recession since the Great Depression.

The anti-Olympics crowd made it easier for me to feel some sense of loss when Chicago was quickly knocked out of the running for the Olympics, since they were like a Tea Party bunch -- shouting, screaming, hating, wishing for someone to fail --yet offering no solutions themselves to the many obbbstacles and challenges the city faces. Sure, Daley may have wanted the Olympics as a "legacy" project, and others may have wanted it just so they'd make money off it, but at least he tried. At least they tried. At least those who worked to get the Olympics in Chicago were working for something. What have the "anti" crowd done to the benefit of Chicago?