From First to Worst

Wow, has it been that long since I have posted to this blog? What's happened? I know what's happened -- facebook -- the blog-killer. So, obviously I must have something very important to say, something that could not be constrained within the boundaries of Facebook. What is it that I have to tell the world about, get off my mind, etc.?
The plight of my fantasy baseball team.
I've been in a couple fantasy leagues the past few years, but this year I am down to just one. It can take up a lot of time, especially when you are looking to find the best players at any one time but you're only really familiar with the teams in your hometown or which your hometown teams play.
I've done pretty well the past couple years in this league. Last year mine was one of the top four teams at the end of the season. And this year I drafted an all-star lineup: Pitchers Jake Peavy, Matt Garza; catcher Buster Posey; Home Run Hitter Adam Dunn; Base-stealer Juan Pierre; Boston Red Sox Relief pitchers Jonathan Papplebon and Bobby Jenks. Man, I had every corner covered.
Until they actually started playing. Dunn not only hasn't hit any home runs, he hasn't hit anything. The Red Sox started the season horribly and Jenks fell off the map and the Sox' roster. Peavy has gone off and on the disabled list. Pierre can't buy a hit, which means he can't steal any bases, either. Posey got hurt and is out for the season. And Garza pitches for the Cubs.
Despite it all, I actually was in first place in my five-team division for the first couple weeks this season. But I've fallen off since then and have gotten beat badly a few weeks. This week I am up against a team with as bad a record as mine and whose owner doesn't seem to be paying much attention to it since three of his starting batters are on the disabled list. And he's beating me 10-4 so far.
But it's fun, still It's fun to play with numbers, it gives me a reason to care about most baseball games, and it's something to play around with when I'm bored and in front of a computer. Otherwise, I'm counting the weeks until hockey season -- I'm the defending champ in that fantasy league.
Posted by james at 6:37 PM No comments:

Today on the way home from work I caught the Chicago Transit Authority's Christmas Train, which is decked out with holiday decorations and lights inside and out, has seasonal music playing, and has CTA employees who are dressed like elves passing out info about the train and posing for pictures, and generally getting people in a much better mood than they usually are on the way home from work. The train only makes one run a day, and for only a handful of days through Christmas, so it's pretty cool to see on the tracks, and much cooler to actually ride on, which I got to do for the first time ever, today.
Sometimes this city doesn't totally suck.
Posted by james at 6:40 PM No comments: 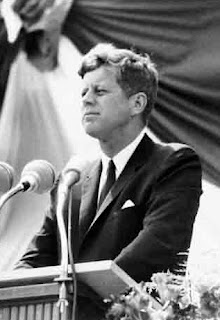 47 years ago today, Nov. 22, 1963, President John F. Kennedy was assassinated. Was he a perfect president or a perfect man? No, but no one is. He did bring hope and optimism and the world looked at the U.S. as it never had before. The following comments were made while he was president, some 50 years ago, but strangely, sadly, but not surprisingly, the remarks apply as much today as they did then. They also apply to those Republicans and Tebaggers and Democrats turned Republicans who who dare suggest that JFK was anything but a liberal. Here he is, in his words:
"I believe in human dignity as the source of national purpose, in human liberty as the source of national action, in the human heart as the source of national compassion, and in the human mind as the source of our invention and our ideas. It is, I believe, the faith in our fellow citizens as individuals and as people that lies at the heart of the liberal faith. For liberalism is not so much a party creed or set of fixed platform promises as it is an attitude of mind and heart, a faith in man's ability through the experiences of his reason and judgment to increase for himself and his fellow men the amount of justice and freedom and brotherhood which all human life deserves.

"I believe also in the United States of America, in the promise that it contains and has contained throughout our history of producing a society so abundant and creative and so free and responsible that it cannot only fulfill the aspirations of its citizens, but serve equally well as a beacon for all mankind. I do not believe in a superstate. I see no magic in tax dollars which are sent to Washington and then returned. I abhor the waste and incompetence of large-scale federal bureaucracies in this administration as well as in others. I do not favor state compulsion when voluntary individual effort can do the job and do it well. But I believe in a government which acts, which exercises its full powers and full responsibilities. Government is an art and a precious obligation; and when it has a job to do, I believe it should do it. And this requires not only great ends but that we propose concrete means of achieving them.

"What do our opponents mean when they apply to us the label "Liberal?" If by "Liberal" they mean, as they want people to believe, someone who is soft in his policies abroad, who is against local government, and who is unconcerned with the taxpayer's dollar, then the record of this party and its members demonstrate that we are not that kind of "Liberal."

"But if by a "Liberal" they mean someone who looks ahead and not behind, someone who welcomes new ideas without rigid reactions, someone who cares about the welfare of the people -- their health, their housing, their schools, their jobs, their civil rights, and their civil liberties -- someone who believes we can break through the stalemate and suspicions that grip us in our policies abroad, if that is what they mean by a "Liberal," then I'm proud to say I'm a "Liberal."

He's a little bit country. Of course people will call it his "Brokeback" video, but I like the "Butch and Sundance" touch at the end. Nice song, neat video. Now why is this man not a superstar in the U.S.?

Disgrace | The New Republic
"I am speaking to you as an American, Mr. Obama."
What is disgraceful has been this president's failure to lead, on what the New Republic calls, rightly so, one of the most important civil rights issues of our time.
Posted by james at 12:32 PM No comments: 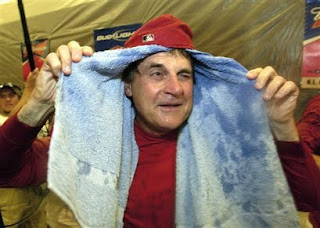 (in which I begin a new feature of my blog, sure to become world-renown and a favourite feature of all of my readers. Essentially, it asks the rhetorical question, "Hey, douchebag, what's with that?" Where debate or intelligent engagement just wouldn't matter, all you can do is tell someone, "Hey, douchebag!")
The first "Hey, Douchebag!" honor goes to:
The d-bag who felt the need to stick a "Don't Blame Me, I Voted For the American" bumper sticker, (which included a mock Obama campaign logo), on the inside of the elevator door at my doctor's office. So, to that dimwit I'd say, "Hey, Douchebag!" then make him or her stand in that elevator and take the offending bumper sticker off the door with their fingernails, then make them clean the door of the sticky residue, until it was clean.
Posted by james at 1:23 AM No comments: